I am so excited to announce I am part of
Life in the Lucky Zone (Zone #2)
by Patricia B. Tighe
BLOG TOUR
presented by Swoon Romance and
hosted by Chapter by Chapter! 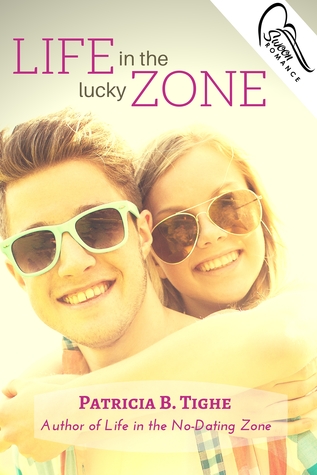 Seventeen-year-old Lindsey Taylor has been living a charmed life—always the lead in school plays, possessor of a healthy entourage and a hot boyfriend. But halfway through her junior year, the unthinkable happens. Her boyfriend dumps her. She screws up her audition for the spring play. And to top it all off, her theater teacher wants her to run lines with Trey Berger, a gamer guy who irritates her practically every time he opens his mouth. Lindsey needs to find some better luck and quick.

Trey Berger can barely tolerate Lindsey Taylor. It’s bad enough that their best friends are dating and he has to see Lindsey at group hangouts. Now they have to rehearse together. Berger would rather do just about anything else, even chill with his grandmother, whose dementia has forced her to move in with his family.


But as the semester continues, Berger discovers there’s more to Lindsey than the drama queen persona she puts on for everyone else’s benefit. And the person behind the mask might be someone he cares about. A lot. So what exactly is he going to do about it?

And while Lindsey desperately tries to change her luck and heal from the breakup, she slowly realizes Berger has become her best friend. This video-game-playing boy makes her laugh. And holds her when she cries. Could he possibly become something more?

After reading the first book in the series, I wasn't sure I was going to like this one because I felt like I already knew Berger and Lindsey. I wasn't sure I wanted to read more about this girl, who I felt was just not a nice person at all. But I figured there had to be reasons on why she was the way she was and I was willing to give this book a shot. I am so glad I did.

I think we all have known someone like Lindsey... High maintenance, bossy, acts like she doesn't care what people think, needs everyone's attention... Well, I sure have. Deep down I have always known there are deep issues with people like this. They have their insecurities and feel as though they have to be a certain way to keep from getting hurt. In this book, Tighe really brings to light just how broken Lindsey is, not only that, but in Trey Berger as well.

While the story line went along smoothly, I felt there were places where it just dragged on a little. But overall, I enjoyed the character building. There was a lot of growth in each of the characters, especially Lindsey, which I was hoping for. But the chemistry between Berger and Lindsey just grew and grew. It takes talent to bring such good feels to a budding relationship, feeling a kiss like you are experiencing it yourself, and have it be enough.

I appreciate a good clean read like this one. One that I can pass along to others, especially young adults and teens knowing this is a great, wholesome, sweet teen romance. The mother of two grown sons, Patricia B. Tighe lives in El Paso, Texas, with her husband and two dogs. Her love of the written word caused her to get a journalism degree from Texas A&M University in 1980 and an MA in Writing Popular Fiction from Seton Hill University in 2008. When not writing or reading, she can be found walking the dogs or yelling at the TV during an NFL game. She's also a fan of British TV shows. Downton Abbey, anyone?

With a weird sensation in my gut, I set the tea on the TV stand and then awkwardly put both arms around her. She turned her face into my chest and gripped my flannel shirt in her fists. I held her shaking body tighter, which seemed to make her cry even harder.

Well, this was fun. It looked like more comfort equaled more tears. Who knew? And why hadn’t that unnamed person ever told me? Jerk.

I had no freaking idea what to do next. Apparently Rose and Claire were right. Lindsey was in a lot of pain. Should I say something? Pat her on the back? I went for the easiest thing I could think of. I moved one hand to the back of her head and just held on. Some kind of citrusy scent floated up from her hair, and I had to swallow the urge to sneeze.

It must have been three minutes, but it felt more like three days before she stopped shaking in my arms. Then she shifted, resting her cheek against my chest. Her breathing began to slow. She wasn’t falling asleep, was she? But no. She let go of my shirt and slid her arm around my torso. Holy moly. How long was I expected to stay in this position? I mean, she was soft and everything, so holding her was nice, but we were only friends. If this went on much longer, it was bound to get seriously awkward.

I had to do something. I started running my hand up and down her back. “You asleep?” I whispered.

“No.” She lifted her head and yawned.

I chuckled. “But you were close.”

She sighed. “Yeah, guess I was.” She straightened and pulled herself out of my arms.

I tilted my head slowly from one side to the other. “Don’t say that.”

“Because if you think like that, then you probably won’t argue with me. And I’d miss our fights.”

She smiled. “I promise to always fight with you.”

“Even though you’re amazingly good.”

This time she actually laughed.

I smiled. Good, no awkwardness. We’d gone back to the way we were before. I showed her to the restroom, then helped her get her stuff together and walked her to the car.

She tossed her purse and books into the front passenger seat and lifted her head as though she were steeling herself for the drive home. She smiled up at me. “Thanks, Dragon Boy,” she whispered, and then kissed me on the cheek.

Um, okay. My face tingled where her lips had touched. I held on to the door while she climbed in and then waved as she drove off.

Nope, nothing different at all. Right.

One (1) winner will receive a $10 Amazon Gift Card and a digital copy of Life in the Lucky Zone by Patricia B. Tighe (INT)

To enter fill out the rafflecopter entry below

Then check the Blog Tour schedule and jump to the next blog to see what others have to say
about this great book!

Posted by Karen Russell at 3:00 AM